Design of an interface for a highly cognitively demanding situation: simultaneous interpretation.

Understanding the needs of simultaneous conference language interpreters and design an interface that can support them in the remote interpretation activity.

Understanding the needs of simultaneous conference language interpreters and design an interface that can support them in the remote interpretation activity.

As an external consultant, I lead the product design of SmarTerp, a computer-assisted interpreting tool (CAI). I performed user research, wireframing, and usability testing. The work presented here is a portion of the overall work done in the project. In the overall project, other than designing specifically this interface, I additionally assisted the Product Owner in informing long-term design choices following business needs. This project is the subject of my MSc thesis in HCI, which can be read here﻿.

Computer-assisted interpreting (CAI) tools are software solutions developed specifically to suit the needs of interpreters, they are the interpreter’s workstation. SmarTerp is an innovative CAI tool that aims to lessen the cognitive effort by providing to interpreters Automatic Speech Recognition (ASR) functionalities during their work activity.

To design the main feature of the platform, the Oral Interpreter Interface, the steps from the User-Centered Design have been followed considering the budget and time constraints. It was my responsibility to decide which method better suited the project's needs. I was in charge of executing, synthesizing, and present the results. 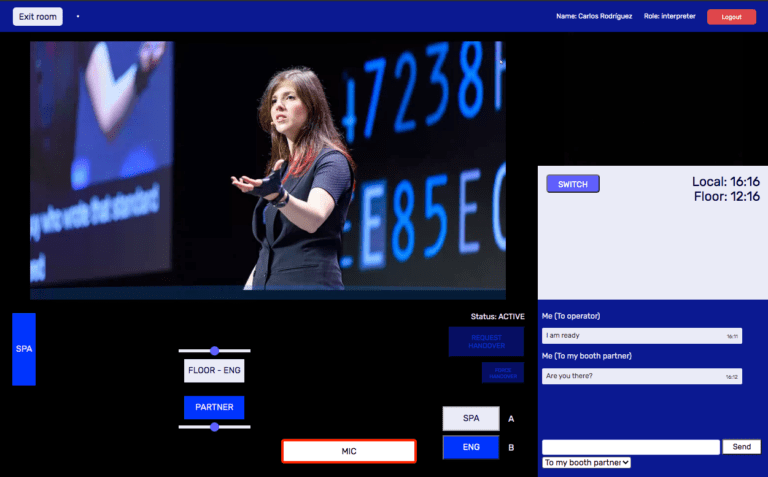 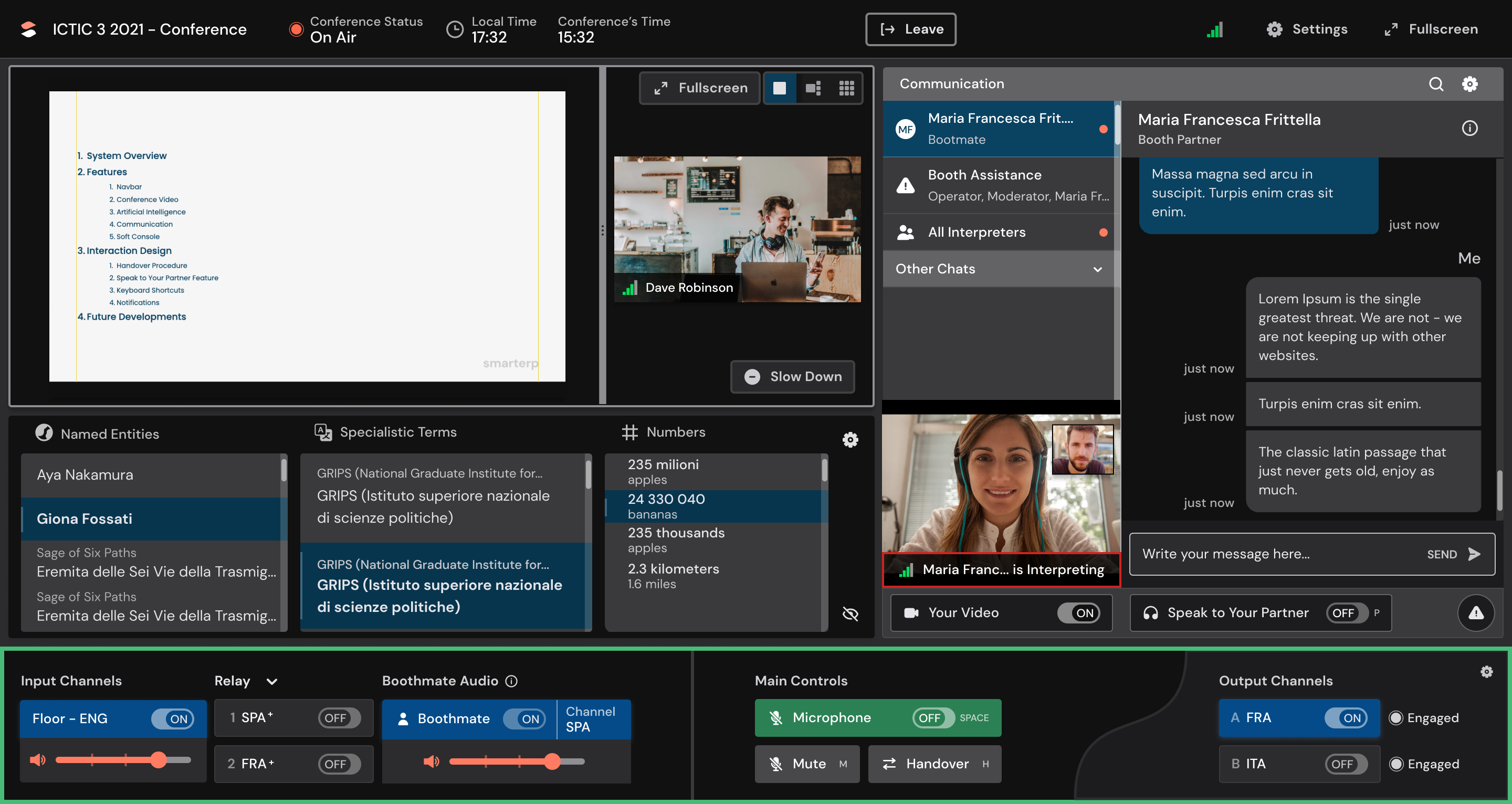 The goal of the first phase is understand the design and business context. By performing stakeholders interviews, it was possible to define the User Work Models the system's flow model.

By performing stakeholder interviews is possible to understand the company's business goals, the target users, the roles, duties, and actors inside and outside the organization. The information provided through the stakeholder interviews has been summarised in a User-Centered Business Canvas. This provides an initial view of the relationship between business and user problems.

A system flow diagram has been created to get a better understanding of the roles, responsibilities, and information flow within and outside the organization. This diagram helped me understand how the Smarterp solution fits in the environment. 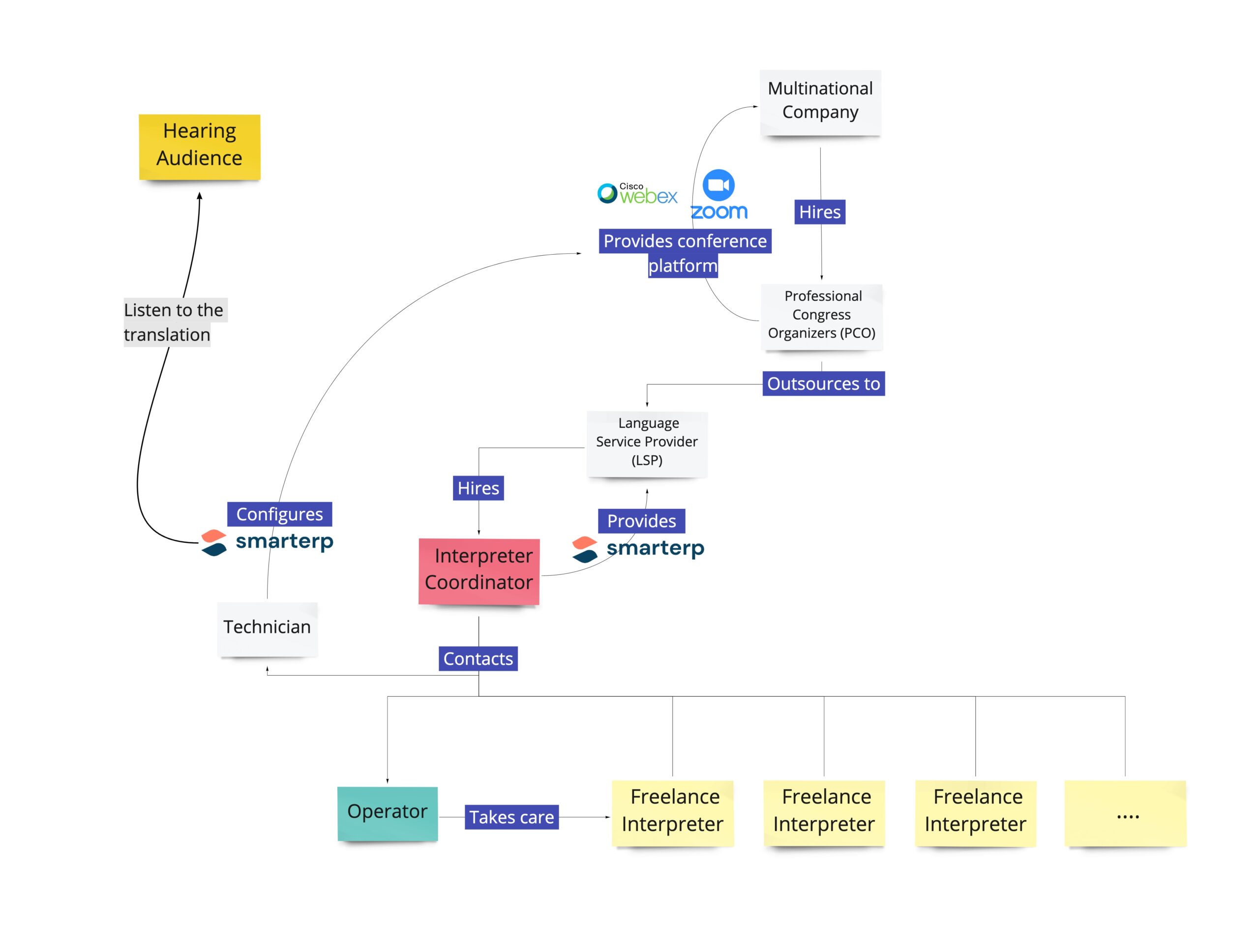 This tool echoes the Business Model Canvas, with sections dedicated to the business side, and integrates them with key information for the user experience planning. The employment of this tool helped me to have enough information about the business context and the stakeholders' opinions over which kind of software features/capabilities needed to be leveraged to obtain a successful platform. This design tool helped the UX design process thanks to the ability to elicit and synthesize Subject-Matter Experts' (SMEs) knowledge that has been obtained during various meetings, workshops, and Design Critiques.

To get knowledge about users problems and get to know their context of work, I conducted user interviews and contextual inquiries. In which I asked the users to describe their most recurring problems as well as observed performing their work activity.

Interviews were performed with 10 target users: 5 of which had visual impairments (3 blind, 1 retinitis pigmentosa, 1 low visual acuity). The interviews have been performed using the Critical Incident technique: it consists of asking users to do a storytelling of a meaningful incident that occurred in the past and describe it. In this way, it has been possible to gather data about the problems that most disrupt the users' work activity.

As interviews by themselves were insufficient to gather enough data about the complexity of the working context, I conducted one contextual inquiry. The contextual inquiry is a user research method that consists of a blend of observation and interviews. I went to the Congreso Bienal of Colegio Oficial de Odontólogos y Estomatólogos de la Primera Región (COEM) in Madrid, Spain. The users observed were oral language simultaneous interpreters for an online conference: while the interpreters were located in physical soundproof booths, one for each due to the COVID-19 protocol, the conference speakers were connected to a conference call. 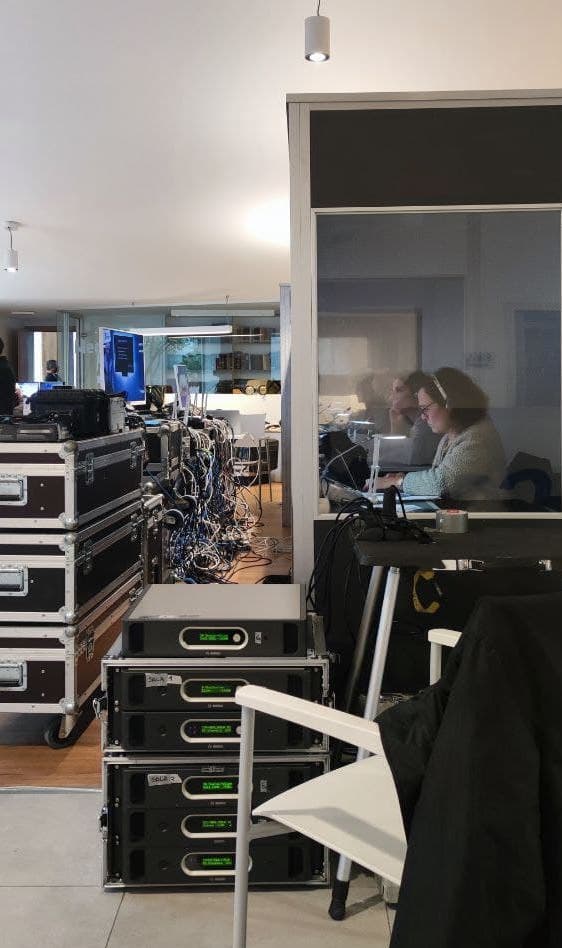 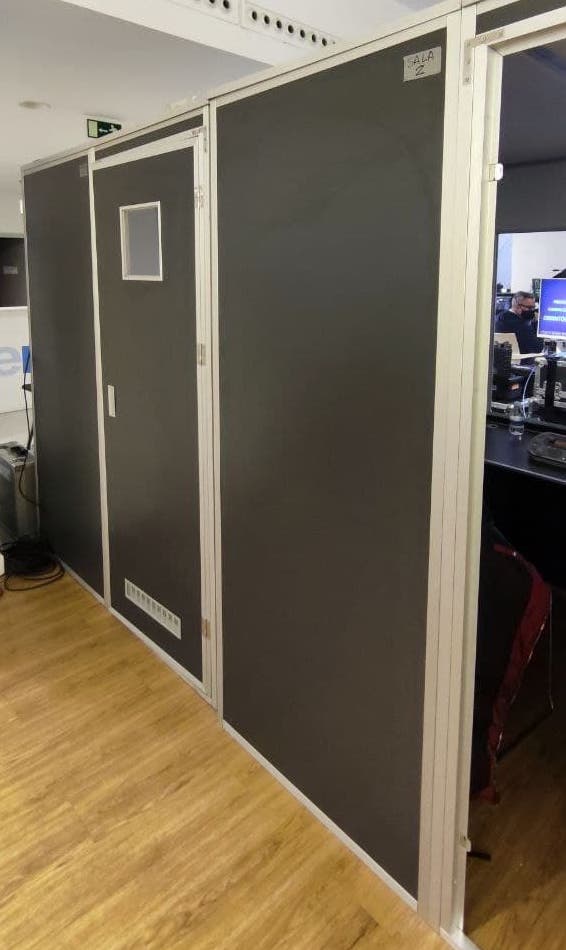 Photos of the environment taken during the contextual inquiry

After conducting the user research, the knowledge obtained has been analyzed with the usage of affinity diagrams and synthesized in different design tools such as a user persona, an empathy map, and a user journey map.

In order to better motivate design decisions, the persona has been employed in all the models created. Observed behavioral data, critical incidents, and the information analyzed helped generate the oral language interpreter user persona: Katy, a 58 years old interpreter from Spain. 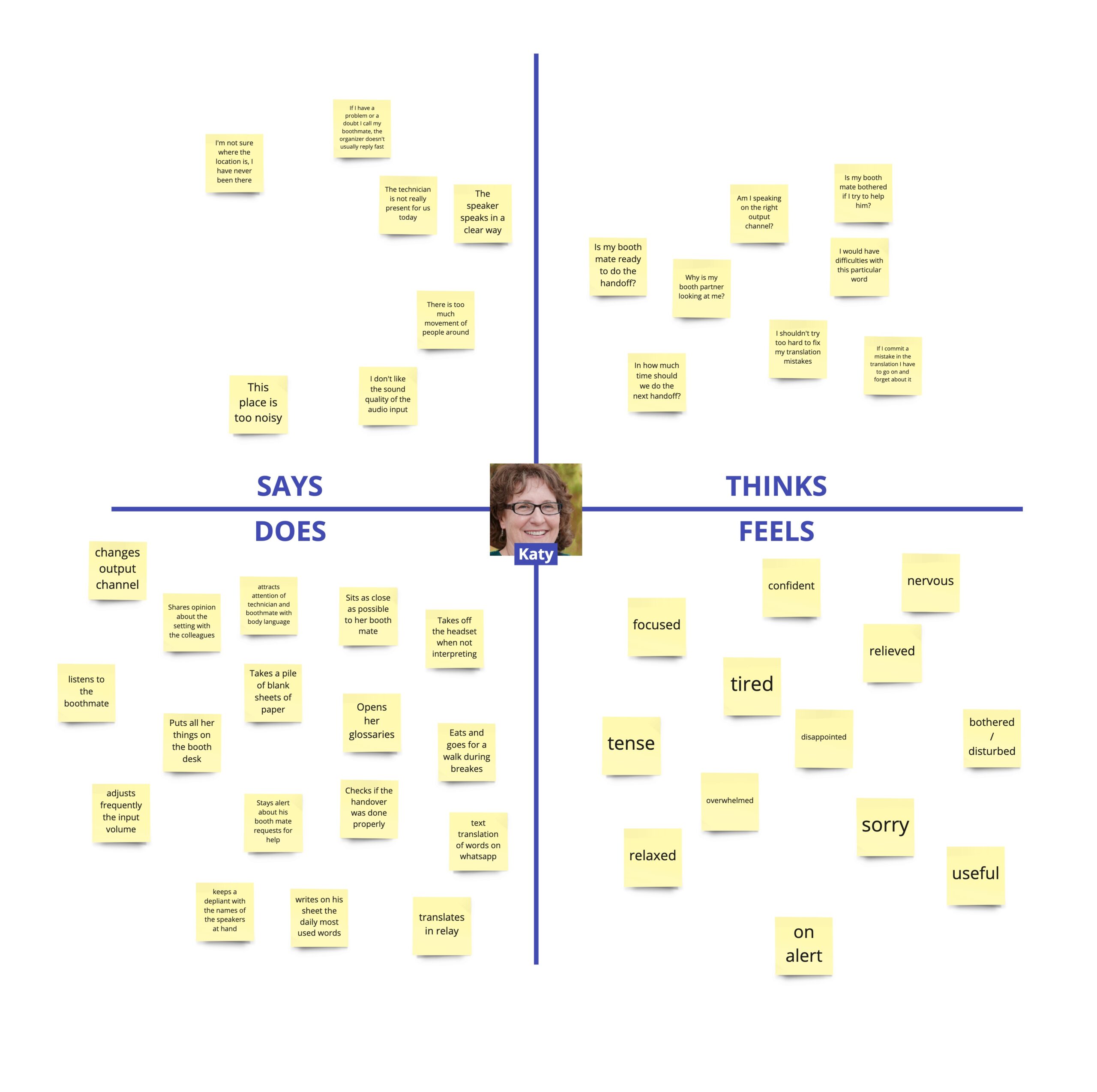 The scenario is an “as-is” user journey, this means that the steps and problems defined refer to the actual experience of the interpreters. By mapping the actual experience, the critical moments that needed intervention have been visualized. The journey depicts Katy's journey before, during, and after an interpretation session. Each phase consisted of different user tasks, pain points, and design opportunities. The pain points are mapped with the feelings and the design opportunities.

The part of the jouney that has been specifically matter of intervention in whith this interface was the central one: start interpreting, interpretation session, and finish interpreting. The crucial part of the interpreter job is carried out during these three steps, thus, takling the solutions to these pain points was prioritised.

Having to assume where the boothmate is going to stop translating

Having to assume where the boothmate is going to stop translating

Inherit the console setup after handover

Inherit the console setup after handover

Disturbed by people passing by

Disturbed by people passing by

Doesn't remember the translation of a specialistic term

Doesn't remember the translation of a specialistic term

Problem in the audio input: doesn't hear anything

Problem in the audio input: doesn't hear anything

Have a private audio and text channel with the boothmate

Have a private audio and text channel with the boothmate

The prototyping phase is the moment in which all the design opportunities and user requirements are shaped into actual solutions: the approach follows an iterative process. By presenting low-fidelity mockups designed with Balsamiq to SMEs and stakeholders I gathered and implement feedback, final high-fidelity mockup was produced with Figma and evaluated in remote sessions with Protopie.

The interpreter interface had to follow strict requirements defined by the ISO/PAS 24019:2020 about simultaneous interpreting delivery platforms. Along with the ISO requirements, I took into consideration the requirements elicited from the interviews with the accessible users. 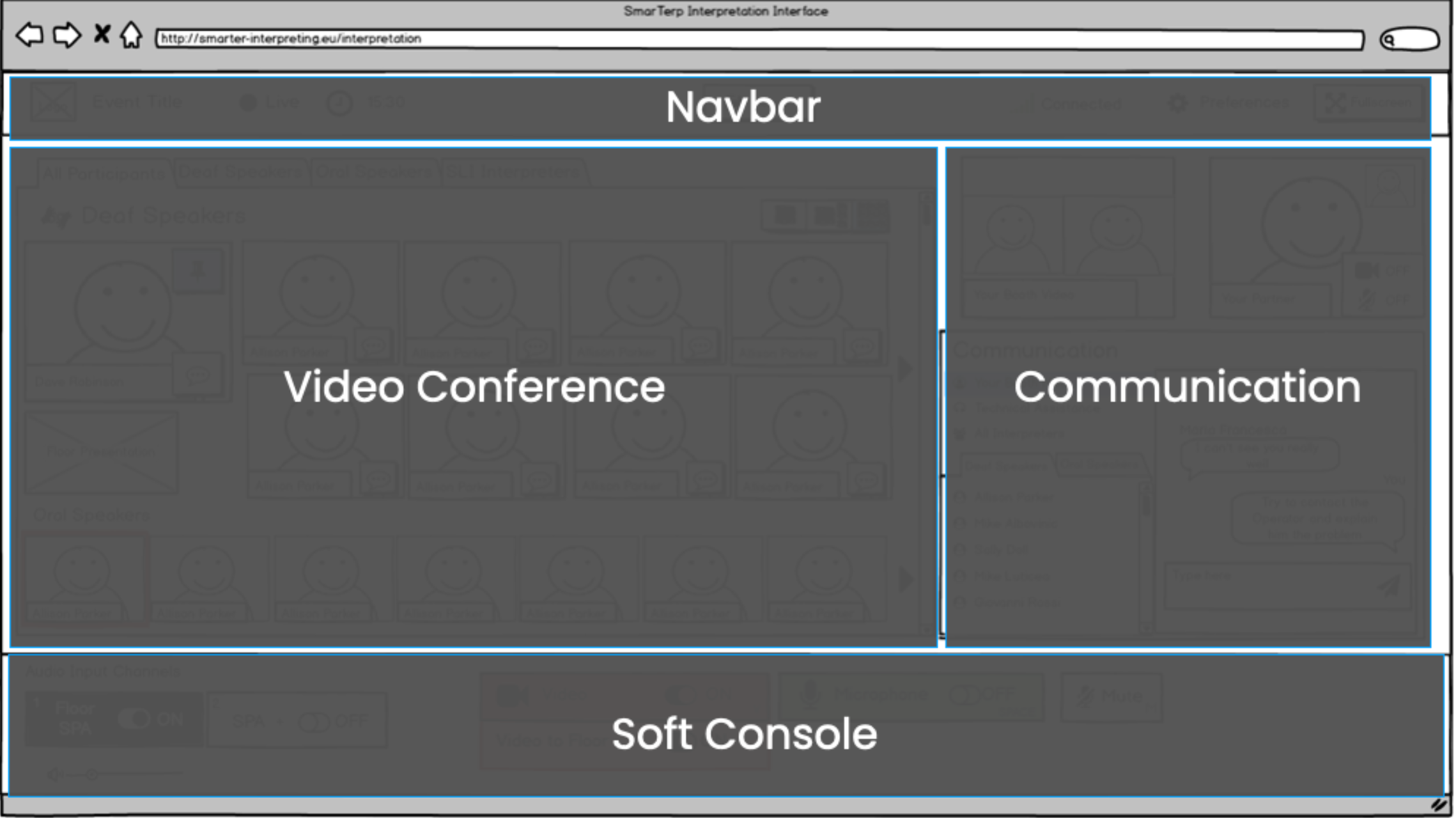 A key differentiator from the competitor’s solutions is the possibility to listen to the boothmate while he or she is interpreting and have independent volume control. Besides this addition, the console had to follow strict requirements set by the ISO.

Some key design decisions have been taken following the insights coming from understanding the users' context: 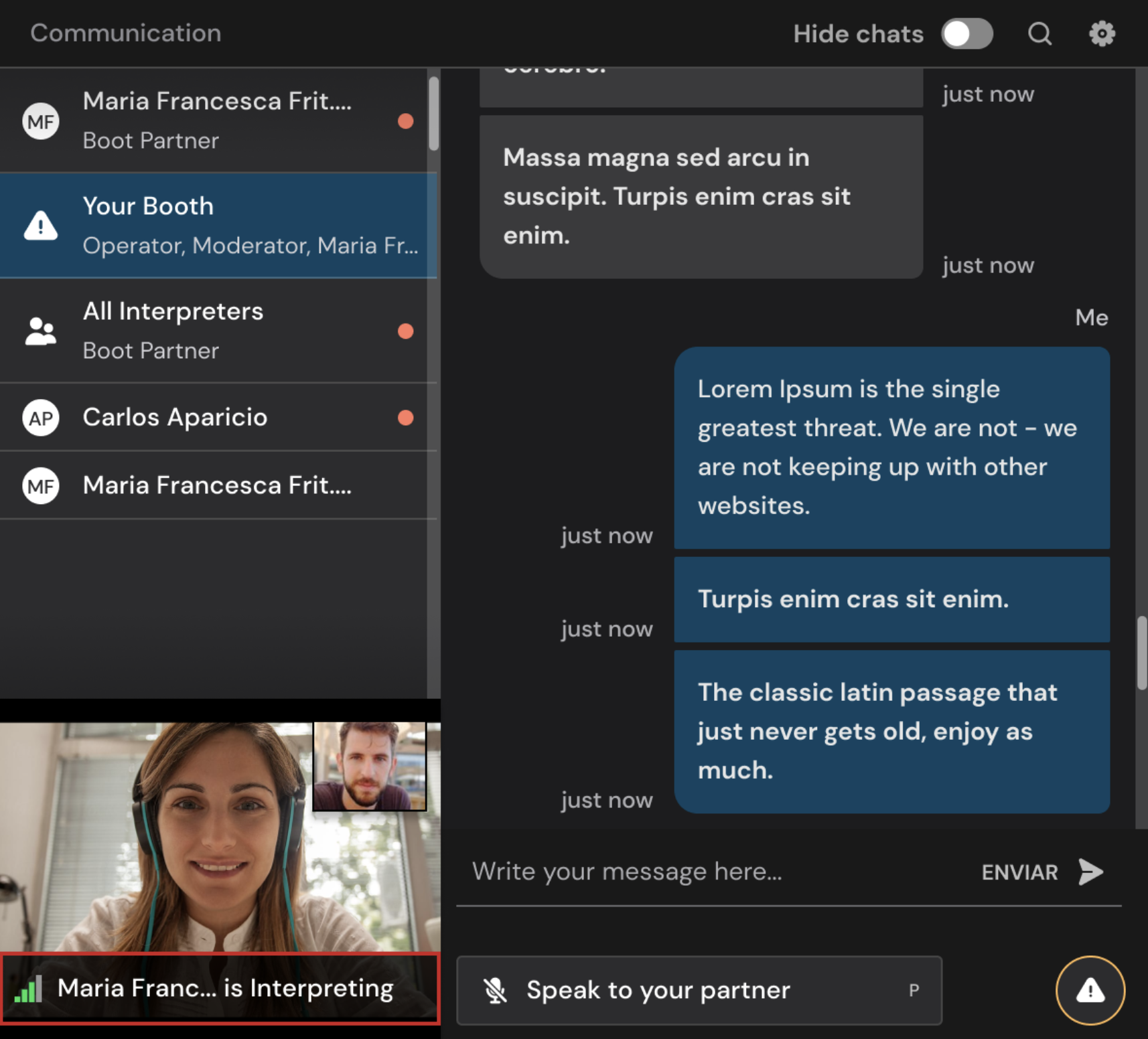 Some key design decisions have been taken following the insights coming from understanding the users' context: 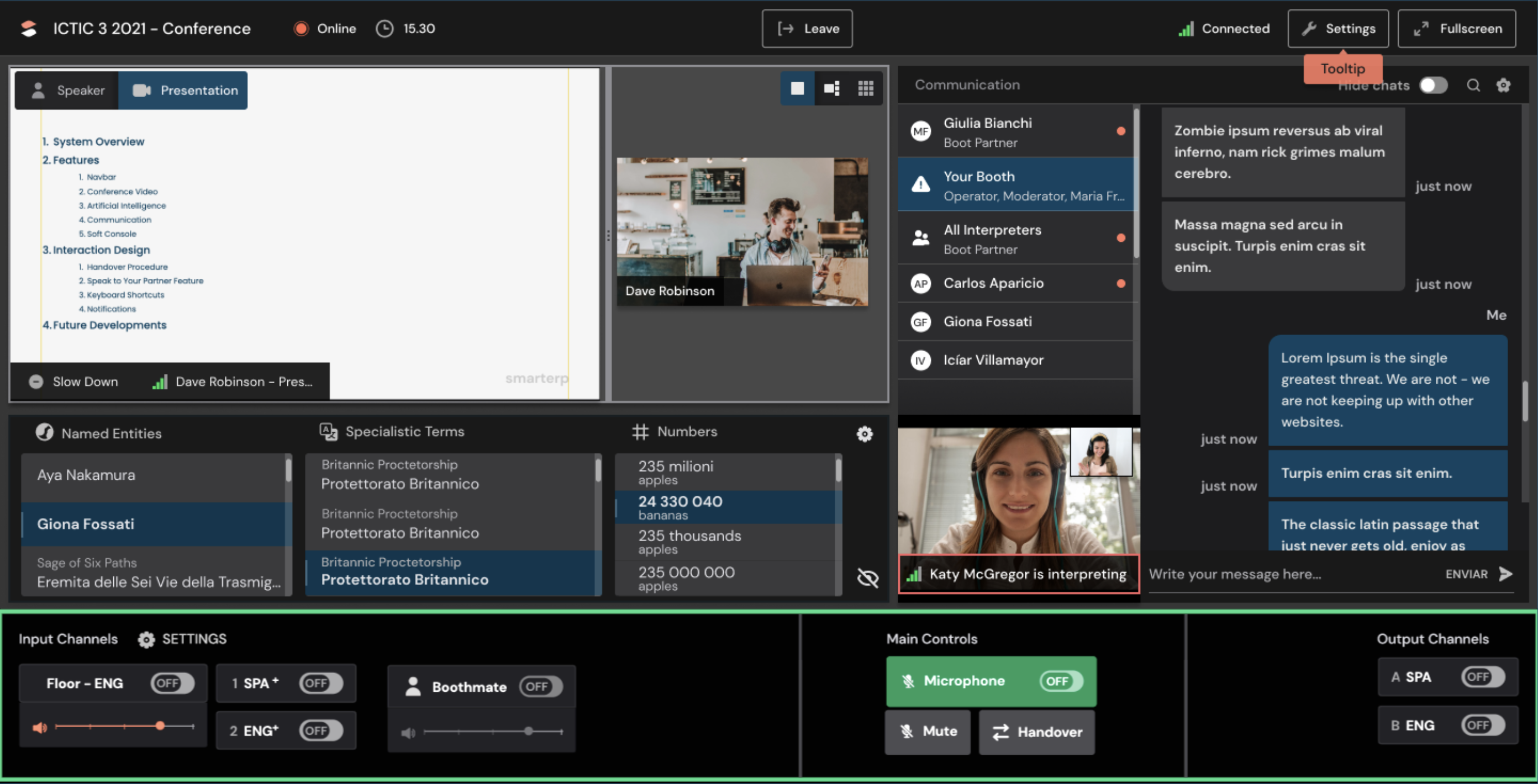 Prototype used to perform the test with Protopie

I built a prototype with Protopie and using the Wizard-of-Oz procedure. 5 target users were involved, one of them was an accessibility user affected by Retinitis Pigmentosa. The observation has been synthesized with the help of a Rainbow Spreadsheet.

It is possible to access the Protopie prototype and interact with it directly the browser:

Go to the prototype

The results were overall positive with a mean SUS score of 90.5 (SD: 6.7), and a mean for the post-task Single Ease Questions of 6.5 (SD: 0.3). Although not statistically valid, the results are aligned with the success rates of each of the tasks:

Confusions emerged from the microcopy of the operator voice connection that had to be clarified.  The procedure was a one-way communication channel but the users were confused by the copy “The operator is talking to you”, assuming that the operator could hear them.

The second major problem regarded the microphone handover procedure: it didn’t match the expectations of some users. It was later understood from the post-test interview that these users' mental models were formed by their expert and frequent usage of different handover procedures present in other interpreting platforms

The usability testing helped to discover problems in the interface, graphic appearance and interaction design of the handover process had to be adjusted.

This interface is the core of innovative functionalities that SmarTerp is developing. It can be considered a milestone in the project: it took a considerable amount of resources to gather and modelise the data that now constitute the backbone for the project’s future developments. The results obtained from the usability test have been rather positive: the users did not display any major problem in interacting with the system. Still, some difficulties emerged while interacting with the handover functionality: these problems emerged from previously formed mental models and have been solved by designing multiple handover processes.

Qualitative results showed that the product has been perceived as useful, and some particular features have been addressed to be innovative in the sector of the CAI tools, such as the boothmate video connection, the private chat with the boothmate, and the input channel dedicated to listening to the boothmate.

Looking with a more long-term holistic view of the interpretation sector, SmarTerp will have to tackle problems that each sector inherits from the virtualization of work activities: isolation and sociality problems. In a not-so-distant future, where the usage of SmarTerp will be accepted as work practice, an aspect that is embedded in the interpretation job will start lacking: the social aspect of meeting colleagues and building networks of professional connections. This diminishing condition already emerged from the first interviews, where interpreters expressed their concerns and, in some cases, skepticism towards adopting the solution. In the foreseeable future, SmarTerp should start tackling these important problems if it aims to establish itself as a solution that fully empowers interpreters and their work activity. 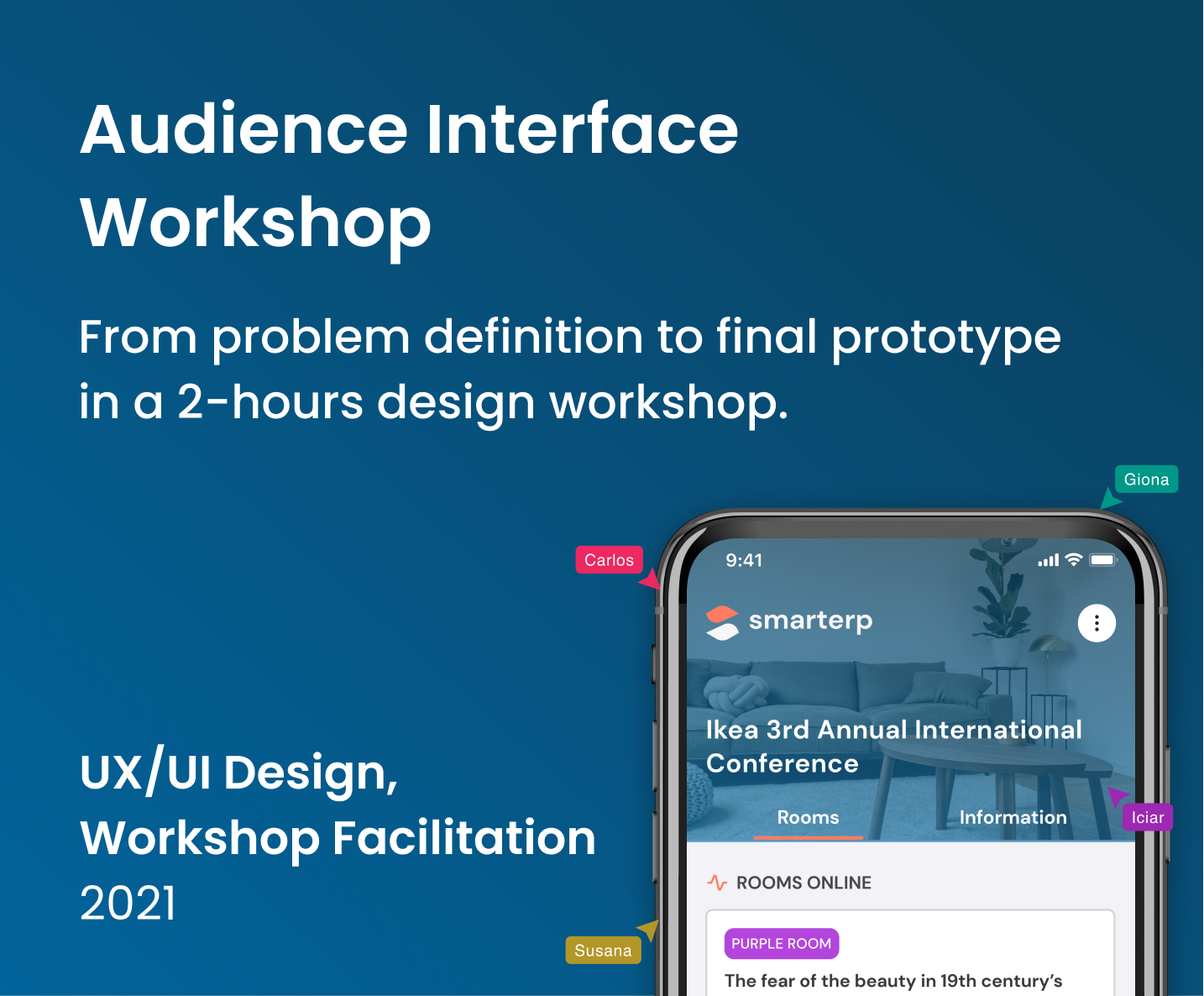 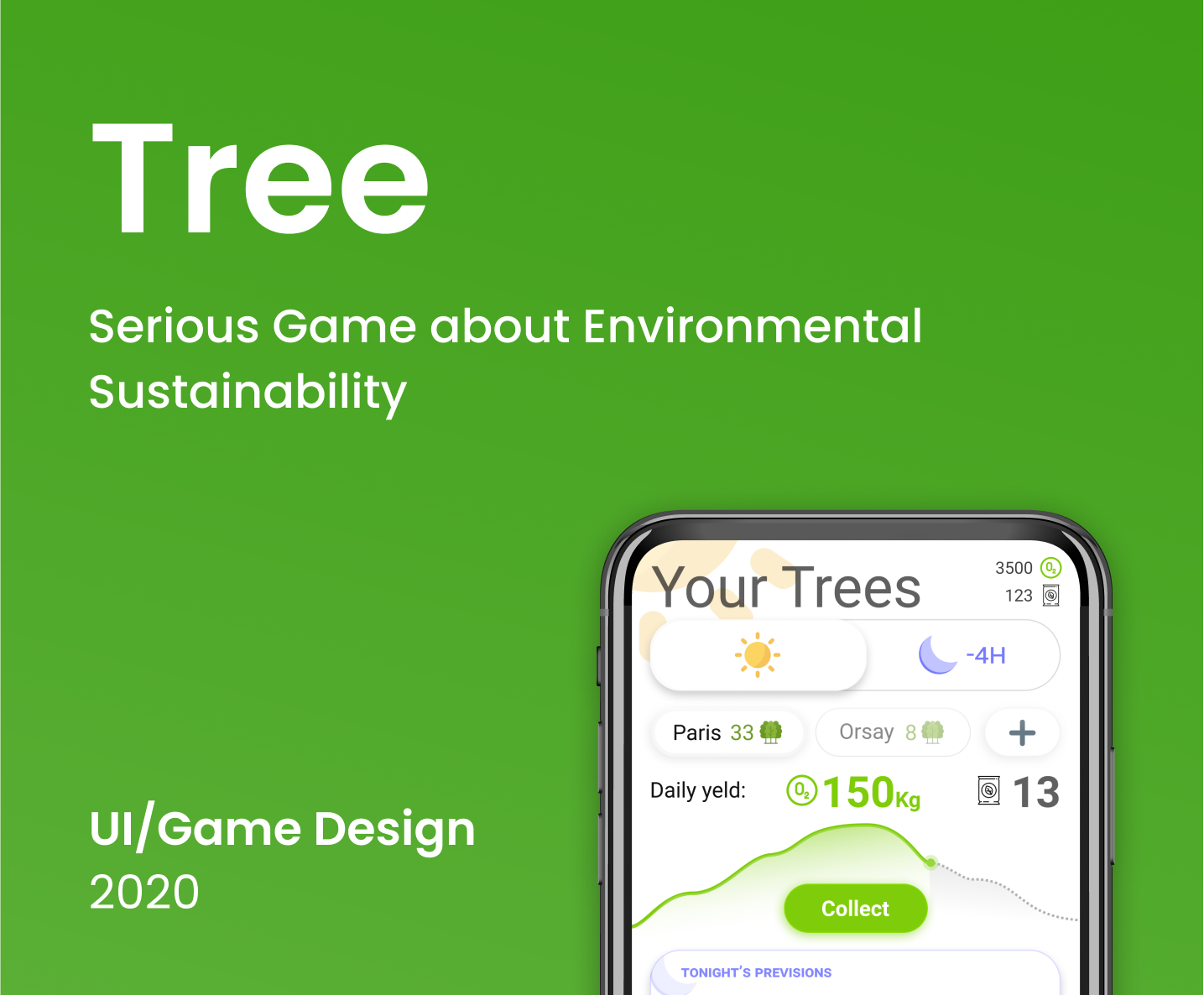 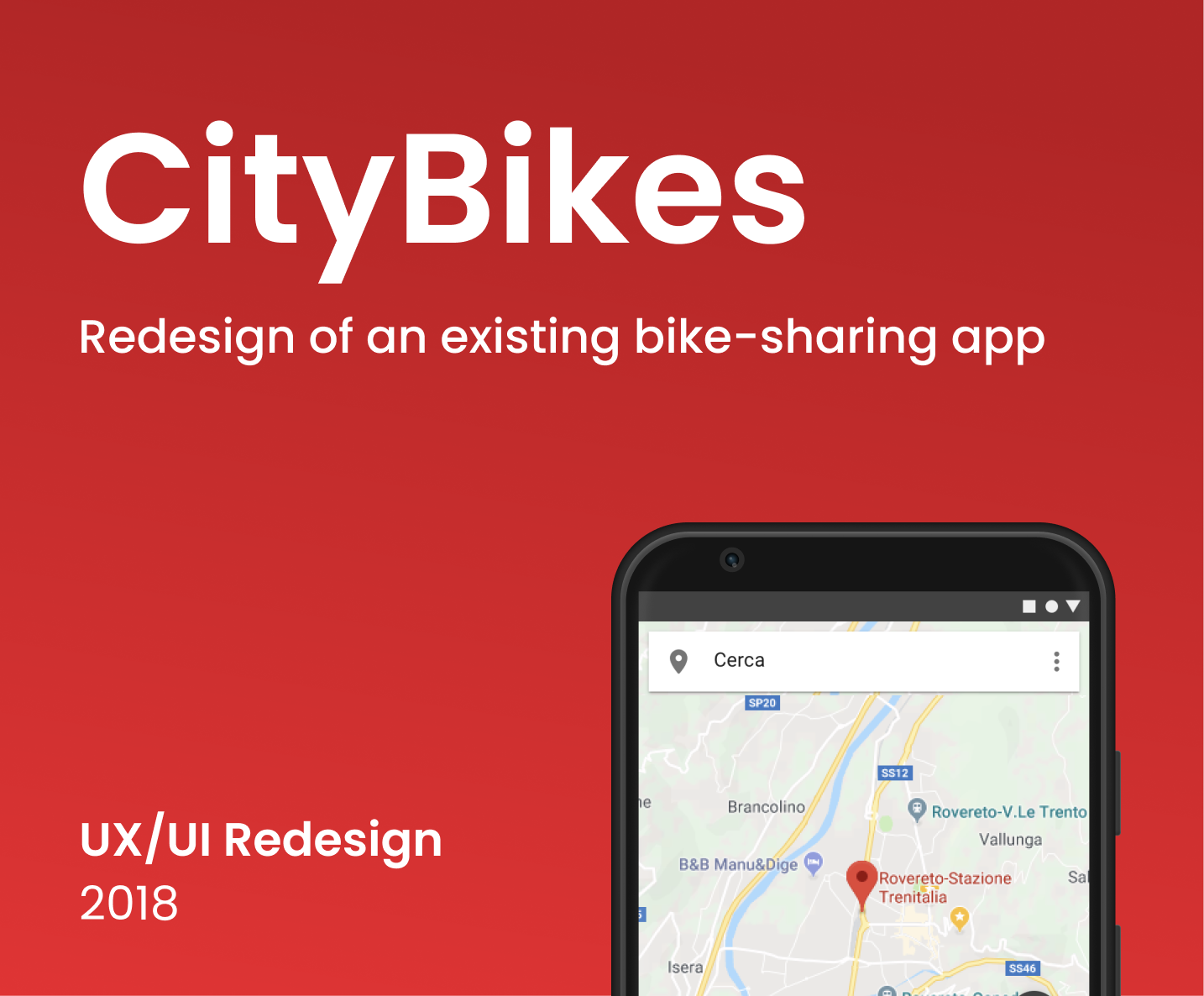